If you want to find the secrets of the universe, think in terms of energy, frequency, and vibration.” Our ancestors must have had this idea in mind when they began the rituals of crystal healings. And why not, after all, crystals are like mother Earth’s own jewellery.

They are infused with vibrations that are known for channelizing energies to find the perfect balance. Since times immemorial, crystals have been used in various civilizations and religions that realized the powerful abilities of crystals and gemstones.

Be it Egyptians or Aztecs, the ancient world incorporated gems and crystals into jewellery, cosmetics, decorative statues, amulets to release mental, physical, and spiritual blockages. But is this it or was there something more to the beginnings of crystals and gemstones? 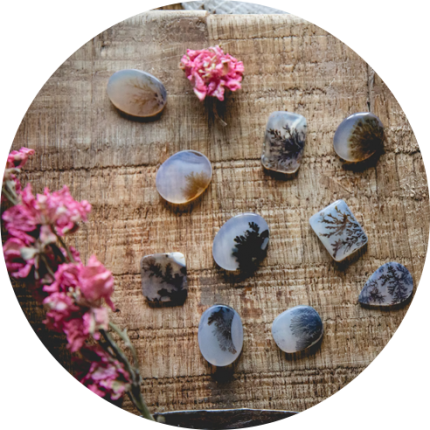 One of the first historical references to the use of crystals takes us into the times of Ancient Egypt. Their jewellery and amulets were often carved out of precious crystals and gemstones such as eilat, lapis lazuli, turquoise, carnelian, emerald and clear quartz. Dated around 1600 BCE, an Egyptian medical papyrus also gives insight for the therapeutic use of various gemstones and crystals. For instance, they used beads of lapis lazuli, malachite and red jasper around a sick person’s neck to heal them. Not just this, ancient healers also used to pulverise gems and mix them with liquid to make an elixir to drink. The healers used the elixirs depending on their colours. While bloodstones were used for bleeding, lapis and yellow beryl were used for restricted circulation and jaundice respectively.

1. Eilat Stone is a combination of Turquoise, Chrysocolla, Azurite, and other minerals.

2. It displays many colorful designs which are caused by the oxidation of manganese, copper, and iron.

3. Every Eilat Stone has its own lovely pattern, making each stone very unique and special.

4. It’s often mistaken as a Turquoise, but you can clearly distinguish an Eilat Stone by its bright and colorful designs and polish conditions.

5. Eilat Stones are usually cut as cabochons to highlight their signature color patterns. With an excellent finish and shape, they can exhibit superior luster and bright colors.

6. Eilat Stone is the national stone of Israel, named after the city of Eilat where it was once mined. It used to be known as King Solomon Stone.

1. Black Tourmaline is part of the Tourmaline family. It is also known as Schorl and is a style of silicate crystal. It is commonly found in trigonal crystal systems and is made up of Sodium Iron Aluminum Borate Silicate. The stone is black. Black Tourmaline means grounding and protection.

2. Black Tourmaline has plenty of physical benefits for those whose bodies could use an extra dose of toughness. Helping circulation, reducing the negative imprint of lung problems, boosting metabolism, and effectively cutting down on muscle aches and pains are just a few things that Black Tourmaline can do.

3. Black Tourmaline is deeply connected to the base chakras, those earthly roots that help you to feel safe and secure in your place upon this earth. When your root chakras are beautifully balanced and in check, this grants you that deep-seated self-confidence to embrace who you are, speak your truth, and set upon your own path to spiritual healing. And Black Tourmaline can pave the way.

1. Chrysocolla is the gentlest of stones. It’s not a high-energy stone like quartz, rutilated quartz, or smoky quartz and–unlike malachite, azurite and lapis–it doesn’t bring buried emotions to the surface. Its main role is to soothe, calm and inspire. Its color alone is soothing with a deep blue-green which might remind you of a distant mountaintop or the stillness at the bottom of the sea.

2. For thousands of years, chrysocolla has been known throughout the world as a stone of calming reconciliation and reassurance. In ancient Egypt, it was called the “wise stone” because it shielded and encouraged the mind during negotiations.

3. Chrysocolla, with associations of tranquility, peace, intuition, patience and unconditional love, is known as a healing stone among Native American cultures where it has been used to strengthen the body’s resistance to illness and emotional duress.

4. Chrysocolla is not assigned to any particular month as a birthstone; however it’s a wonderful stone to use in conjunction with turquoise in traditional December birthstone jewelry.

1. Cinnabar Stone occurs as massive or granular, trigonal crystals in nature which are mostly found in a shade between red to silver-red, including purplish or brownish colors.

2. China is the origin of this stone but it can be easily found in the United States of America, Mexico, Peru, Spain, Serbia, and Italy.

3. Cinnabar Stone, which is also called ‘Cinnabarite’, gets its name from the Persian version of the word ‘Dragon’s Blood’.

4. Cinnabar Stone is highly useful for removing negative energies from around you and replacing them with positive and light ones.

5. If you are someone who is extremely distressed in their life, possessing Cinnabar Stone can help you have confidence in the path life has chosen for you.

1. Rune stones are an ancient proto-Germanic tradition dating back to potentially the 1st century AD. They consist of a runic alphabet of 24 letters, usually made out of wood or stone that were used as a method of fortune-telling and protection sigils.

2. The origin of word “rune” stems from the Germanic word for “mystery” or “secret”, and similar findings are present in Old Irish Gaelic, Welsh and Old English, sometimes also meaning “miracle”. In Lithuanian it can me “to speak”, and in Finnish it can also mean “poem”.

3. These days, runes are used as a method of connecting to one’s higher self, inner guidance and tapping into intuition as a method of foretelling what the future may hold and offering advice.

2. An earthing stone, Serpentine also opens new pathways for the Kundalini energy.  It aids in meditation and enhances spiritual exploration.  Serpentine assists the retrieval of wisdom, helping to regain memory of past lives.

3. It clears the chakras and stimulates the crown chakra, opening psychic abilities.  Serpentine assists the conscious direction of healing energy toward problem areas.  It corrects mental and emotional imbalances, helping you to feel more in control of your life.

4. Serpentine treats diabetes and hypoglycemia.  It eliminates parasites within the body, and aids in the absorption of calcium and magnesium.  Serpentine is extremely cleansing and detoxifying for the body and blood.

1. Shungite is a rare black stone made of up to 99 percent carbon. It’s mainly found in Shunga, a village in Karelia, Russia.

2. The stone has a unique composition. It contains fullerenes, or 3-D spherical molecules made of 60 carbon atoms. These molecules are hollow and sometimes called buckyballs.

3. Fullerenes, which are found in shungite, are a type of carbon nanostructure (CNS). CNSs are different physical forms of carbon. According to a 2017 review of studiesTrusted Source, CNSs can destroy harmful pathogens. They reportedly work by damaging the cell walls of bacteria and viruses. Additionally, when CNSs interact with microbes, the microbes lose electrons and die.

4. Since ancient times, shungite has been used to purify water. This is due to its alleged activity against bacteria and viruses.

Crystals and gemstones may look like just beautiful pieces for decoration but their secrets and powers are as intriguing as the mysteries of the universe. Both of them have vibratory effects that can connect our conscious thoughts with the body. They can also magnify the effect of our thoughts and intentions while channelling them into a positive frequency. But these powers cannot help an individual to utmost until they understand their relevance and purpose. Below is a guide that gives you the meaning and benefits of some unique gemstones and crystals.